Back to main mod page 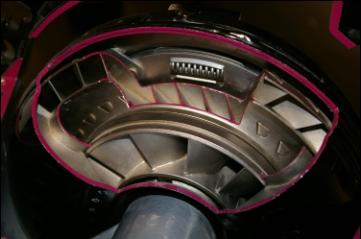 Introduction
This mod only applies to cars with automatic transmissions.

The ECU will often lock up the torque converter when the car reaches a particular speed and gear but usually only under low load conditions. Ecomodders may prefer to lock up their torque converter at lower speeds and lower gears for better efficiency or to keep locked up while climbing hills or accelerating. In addition to reducing heat losses through the TC, this allows one to keep the engine in a more efficient load/rpm range.

If the torque converter is not locked to the drive shaft the RPMs will rise quickly.

If the torque converter is locked the RPM's will stay constant until the speed changes no matter how much power you give to the engine.


Many work shop manuals and wiring diagrams will not have detail about the connections to the automatic transmission. When the torque converter signal wire can't be found from documentation, perform the following steps to locate the signal wire

- Locate the automatic transmission
- Identify all control wires that are connected to the transmission
- Cut the insulation away from the wire
- Solder a wire to the exposed wire. Ensure the wire is long enough to extend into the cabin of the car
- Solder a LED and resistor in series to the wire in the cabin. Connect the other side of the resistor plus LED to 0v which is the most exposed metal in the cabin
- Take the car for a drive. If the correct signal wire has been soldered to the LED, it will light up or turn off when the torque converter is engaged.
- If the LED state does not correspond to the torque converter action, locate another signal wire on the transmission and repeat the process.

- Once the torque converter signal has been isolated trace it back to the closest location to the cabin which is likely at the ECU.
- Cut the signal wire and solder wires of the suitable gauge (thickness) and length to reach the desired mounting location.
- Using a single pole double throw switch (2 position switch) connect the common terminal to the transmission side of the signal wire. Connect the other end of the signal wire (the ECU side) to one of the other switch terminals. Connect a 12v signal or 0v to the other terminal of the switch (12v if the LED turned on when TC locked or 0v if LED turned off when TC locked).


This arrangement will allow the driver to select between the ECU controlled torque converter signal and a locked up setting.